The help of volunteers during the FOQ gives us a chance to free up a member of staff to film a video. Darren Burton’s drone skills are incredible and the weather was perfect for flying and showing the course off during the morning and evening shifts.

James looked through hours and hours of footage to find the most interesting clips and then stitched them together along with the music. We are all very pleased with the out come, there is some mild humour in there too!

For the last year or so, we have been making videos on the course, some of which are instructional videos, videos showing project work on the course, and hole by hole flyovers with and without commentary.

They can all be found at the link below, like this blog you can subscribe and you will receive a notification when a new video is posted. We hope you enjoy them.

After weeks of cutting and rolling without any aeration it was essential that we took the opportunity to let the greens breathe this week, It also gave us a great opportunity to train Apprentice Tristan up on a new machine. The Wiedenmann GXI8 vertidrain punched holes 8mm wide and 6″ deep in a square pattern. It took 16 hours to aerate 1.6ha of greens. after a cut the holes disappear. This also coincided with a wetting agent and preventative fungicide application, the holes will help the wetting agent, water and fungicide make its way the correct parts of the profile. 16mm of rain fell after so everything worked out perfectly.

This week we are introducing a new tee marker to the course. These will take the place of the general play yellow tees with the yellow tees now being promoted for qualifying competitions, supplementary cards and club knock outs only.

The new ‘Club Tees’ are for general play. They will move around and some may be behind the yellow tees on occasions so it does not necessarily mean a shorter course. This will all be dependant on wind direction on the day.

The green staff and club would be grateful if everyone would play from the correct tee markers. 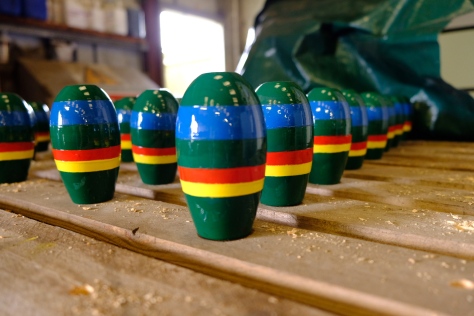 After a heavy spell of use, the range tee is in serious need of some TLC, a heavy dressing of root zone was applied on top of a fescue/ dwarf rye mix. the sand was dragged around into the divot depressions and the tee will be watered nightly to aid recovery. we would expect germination in a few weeks with full recovery in 2-3 months. 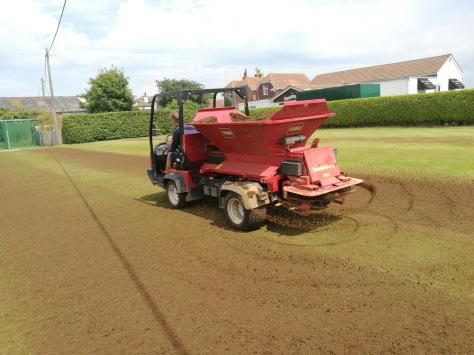 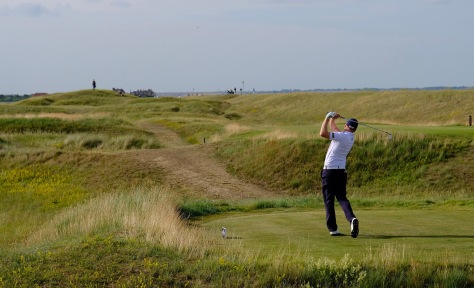 So the final Final Open Qualifying has now passed and what a great success it was. This year we had 9 volunteers:

Thanks to these volunteers we managed to present the course in as good condition as possible.

Evening cuts and wall to wall divoting with help form the Artisan section added a nice touch and raised the bar.

With such a large team all of the work could be completed before the 7am two tee start. There were no problems and with such a wealth of experience in the team any problems that could have arisen would have been swiftly dealt with. The RCP team, R&A and RCP members are very grateful to those who gave up time to come and help out. Thank you.

Above is the job board for the week. the plan was set a number of months before so everyone knew what to prepare for. 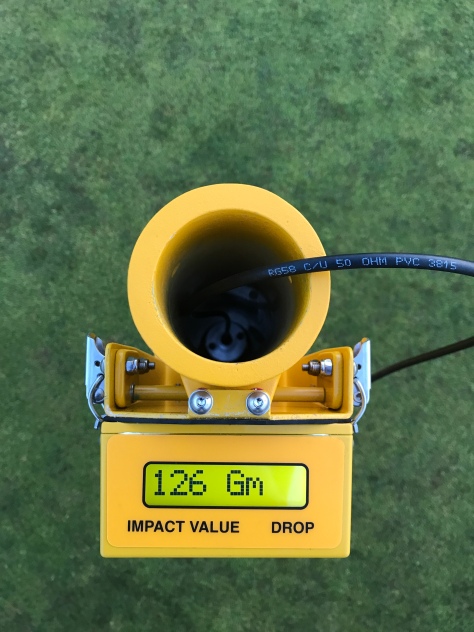 The data taken in the week running up to the tournament helped us to adjust plans to achieve the numbers we wanted, above is a picture of a cleg hammer reading. We were looking to achieve between 110 Gm and 130 Gm, this is very firm, to give an example the greens in the winter are between 85-100 with anything under 100, pitchforks would be found on the green. These readings work along side moisture readings and we can adjust watering and rolling so achieve the correct firmness.

Above is an app called ‘Moasure’ which is used to measure the length the ball rolls off the stimp meter. Straight after rolling we were achieving perfect speeds of around 10′ 7″ with and greens nearer the 10′ mark receiving a double or triple roll. Because of the grass species on the greens it takes a lot of work to achieve these speeds without dropping the height of cut. We cut In the morning sat 4.5mm with Toro 1000s and in the evenings at 3.75mm with Toro Triflex’s, weight distribution and pressures of the different mowers mean they need to be set 3/4mm apart to achieve the exact same height of cut. any lower and the greens would scalp, all of the good work over the years would be ruined so this is the lowest we can go and the highest speeds that can be achieved. The R&A ask for speeds around 10-10’6″, any more and we would risk balls moving on greens should the wind pick up. When Henrik Stenson won the Open at Royal Troon the Greens were stimping around 9′ which is still a great speed.

In the evenings, Darren Burton cooked everyone a fantastic BBQ. picking everyones energy levels up in time for the evening shift.

Apprentices Tristan Martin and Chris Clark out cutting greens with the brushes in the week running up to the FOQ.

The last time I sent my mother this photo she thought I had won a tournament and she got the photo framed, you could imagine her disappointment when I had to break the news!

Very sad to finish the Final Open Qualifying Series but all of the green staff wish Princes Golf Club all of the very best of luck over the next 4 years, we look forward to leading a hand next year. We would also like to thank the R&A and in particular Euan Mordaunt and the PPL staff. We have all really enjoyed hosting the FOQ and it has been a pleasure working along side you all.